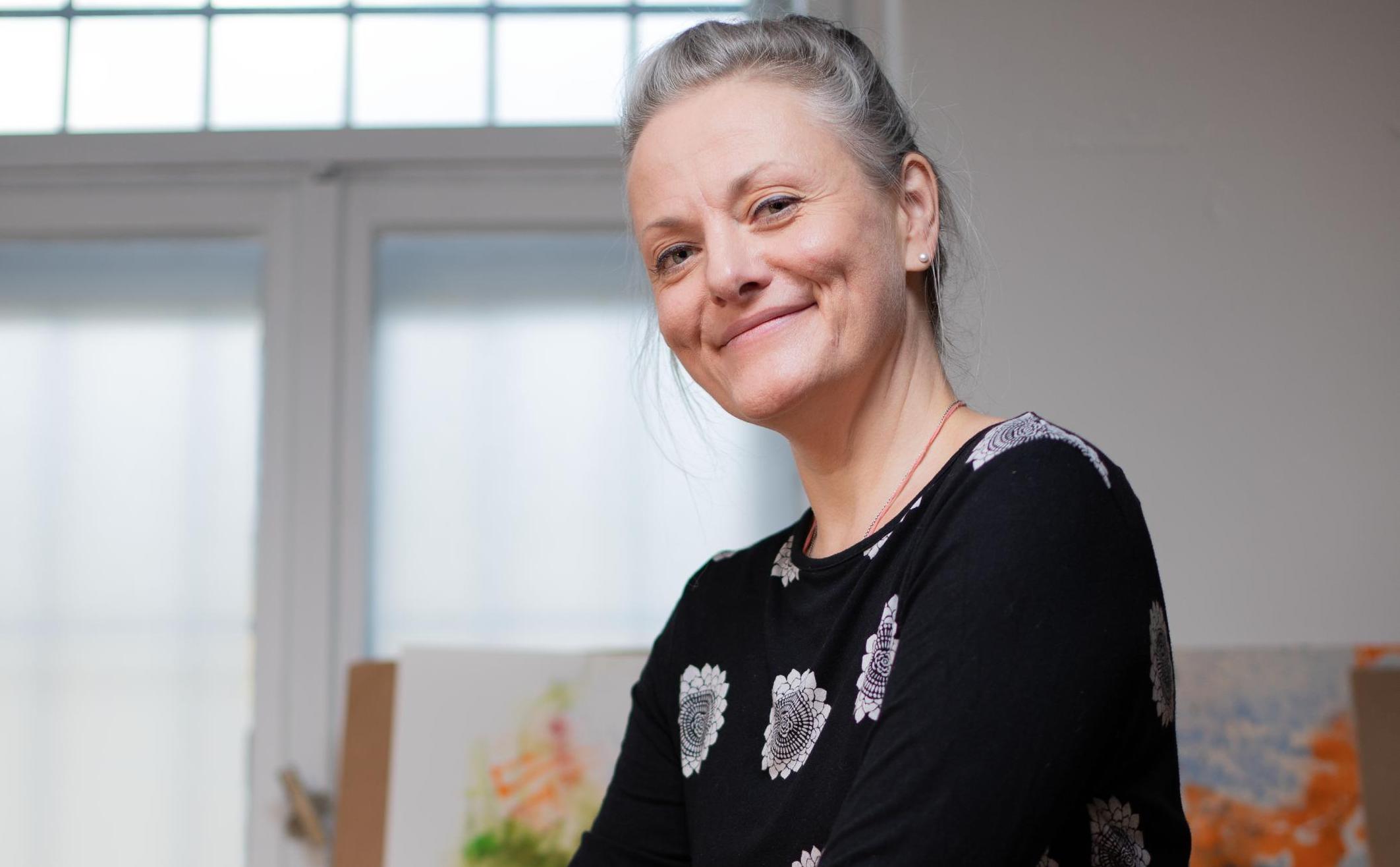 Photographed in my studio by Robert Grund.

My series of paintings FACETTS OF CREATION

Until the beginning of 2019, I had suffered so much from the world that I used my work under the pseudonym Kato to let my audience know about all the ills and injustices around us. In order to speak my mind aloud, I had specifically looked for schools that taught the craft of old master drawing and painting to start my second art degree in 2015. Thus, I enroled at the Freie Kunstschule Köln (private Art School Cologne) and, subsequently, at the Fine Art Academy Cologne.

The closer I get to my inner self, the clearer it becomes to me that I have to stop fighting social imbalances in my works, because the results pose as pictorial manifests of everything I disagree with. In my view, capturing the evils of the world in pieces of art brings them to my viewers’ attention in the first place, and – in turn – this attention injects more energy in them – energy that they don’t deserve and that needlessly keeps them alive. against to be something and not to manifest the situations I disagree with even more by capturing them pictorially and thus, of course, also making the viewers feed them with new energy through their attention.

At the beginning of 2019, a persistent cold forced me to lie on my sofa for four weeks. I was so sick that I couldn’t get up – but I was not sick enough to suppress the urge to paint. This was the moment when they came to me: My creator paintings.

I had to paint! But with oil paint, this seemed almost impossible in a lying position! Hence, I remembered a colour experiment I had discovered by chance back in 2005, which now seemed the perfect solution for the situation I found myself in. At that time, I used a glass plate for mixing and always used a sheet of paper to remove the water-paint mixture in the cleaning process: I did some rough cleaning with the paper sheet, let it rest on the glass plate for some time, and then peeled it off and put it aside. One morning, after a night of reading, I discovered multiple exciting creatures in the sheet of paper just before I wanted to throw it away. All excited, I began to use my pen to trace their shapes and outlines, basically releasing the creatures that became apparent to me in the dry water-paint spill.

This inspired me so much that I got up from my sofa, spilled some colour mixture on a few pieces of paper in the same way, then let the paper dry and retreated to the sickbed with the entire pile, plus a clipboard and all my watercolour pencils. And then the miracle happened: Ten pictures came into the world through me in no time. I had never seen anything like that before and painting them was an enormous pleasure. This was followed by another miracle - they were appreciated by others from the very beginning. Everyone who saw them for the first time exclaimed "Ah!!" and "Look at this!!“ and "There's a unicorn and a crocodile..." and "That's wonderful“ ...!

I spontaneously named them "creator paintings", because they are created in the painting process. I don’t start to work on a piece of art thinking "I want to paint a specific object now and it is supposed to look like this and that" and then set to work. On the contrary, everything is already there, reveals itself to me and I simply make it more visible. That's how they are created: The visuals with the many creatures. From the creator of all humans and things, and of me, who - like all of us - is also a creator ;o)

Shortly after that, my works had to be renamed, because a friendly colleague of mine pointed out that the name was somewhat unfavourable and could be misunderstood by many people who might think I was a megalomaniac and thought I was God. So, I renamed the series "Facets of Creation". And I‘m perfectly happy with that!

What can my paintings accomplish? They can make my audience feel comfortable, secure, relive the joy that I experience when I paint – get an idea of the many possibilities that are available to us, every moment. We can, time and again, and with great joy make a decision for a world full of love, respect, abundance, freedom, creativity, individuality, equality and togetherness. We recognise ourselves in the idea of „I am you“.

I feel especially joyful when someone talks to me about one of my paintings and tells me what she or he discovers in it – together we find things we haven't seen alone. It is always an enriching experience for both sides and a wonderful time together! Thank you.

And here's my very first explorer painting from 2005 on the back of an already crumpled, meant-to-be-thrown-away drawing pad cover. 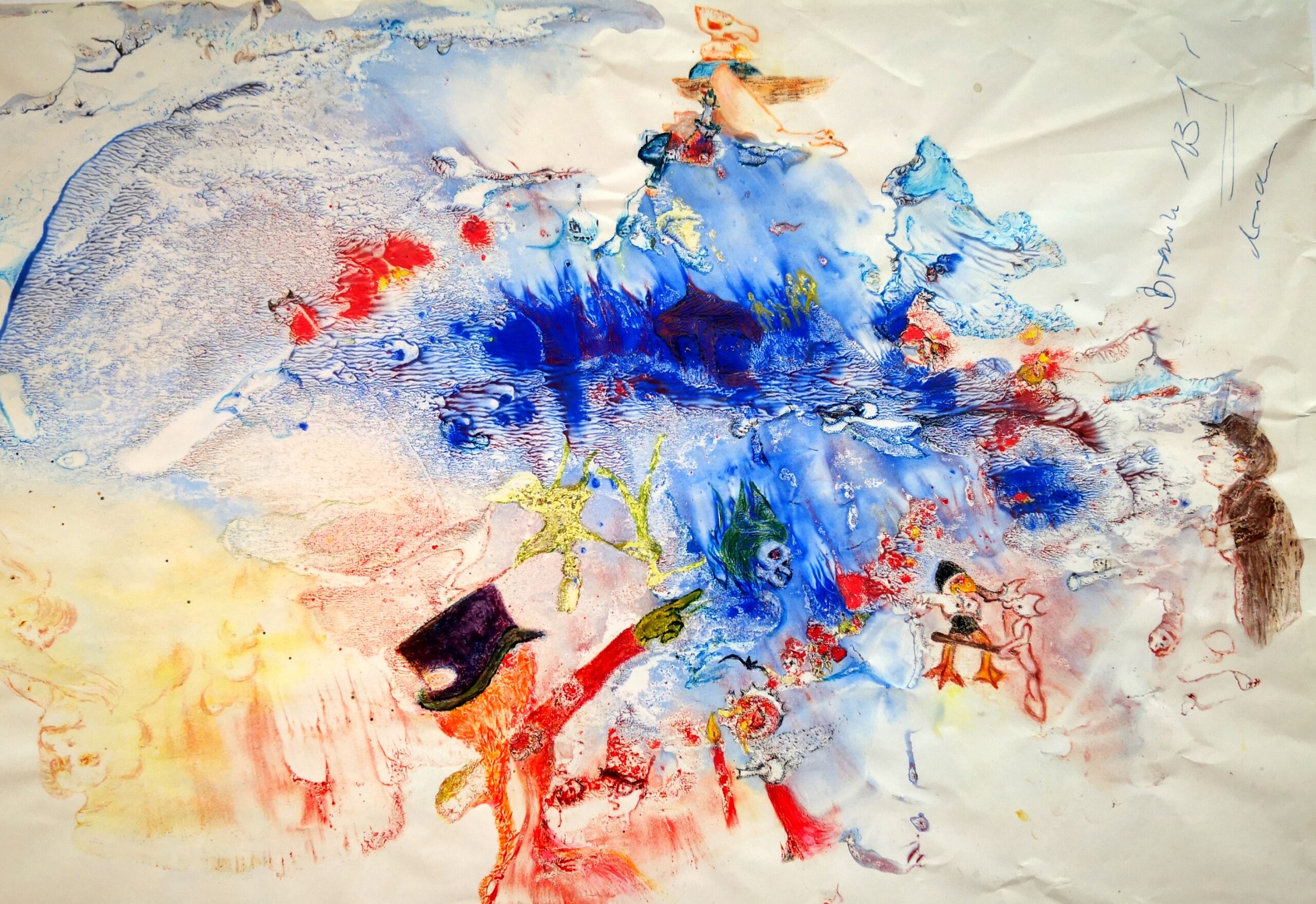